The LIVELab is a multimillion dollar auditorium designed to research the interaction among performers and audience members during music and dance performances. What makes the LIVELab special is that researchers can measure behaviour and physiology of many participants simultaneously. For example, Dr. Laurel Trainor, LIVELab director and professor in McMaster’s Department of Psychology, Neuroscience, and Behaviour, is interested in understanding how physiology and behaviour synchronize during human interaction. Musical performance is one example of non-verbal human interaction.

In a typical research setting, data is recorded from one or two participants at a time— a tedious process that is not necessarily representative of human interaction in the real world. The LIVElab uses technology to measure behaviour in up to 100 participants via 16 motion capture cameras, and physiology in up to 32 participants with: electroencephalography (brain wave measurement), electrocardiography (heart rate measurement), respiration rate, and galvanic skin response (skin conductance level and emotional arousal measurement). All of this can be measured during live musical performances.

“We can measure brain waves not only in individual people, but in many musicians and audience members at the same time. So we can start to look at how their brains react when they listen to music and when they play music together.”

Dr. Trainor explains that a major research focus of the LIVELab is understanding and improving technologies for people with hearing loss. Hearing loss is caused by several factors including genetics, aging, exposure to excess noise, and the interaction of these factors (1–3). Age-related hearing loss affects 70-80% of adults aged 65-75 (2). Hearing loss in middle age may be a risk factor for developing dementia, however, it is unknown whether this relation is causal (4). Despite the lack of causal evidence, hearing loss is an important target for dementia prevention as it is potentially modifiable with treatment and preventive strategies (2,4,5). According to the Canadian Hearing Society, hearing loss is an especially important issue for Canadians since in 2002 nearly one in four adults report some hearing loss. This problem should be proactively addressed within the rehabilitation sciences and aging population healthcare agendas.

“We can manipulate the acoustics [with the virtual acoustics system] and that is really important for studying people with hearing loss,” says Dr. Trainor. The virtual acoustics system transforms the room from an auditorium to a subway station to the Sistine chapel at the touch of a button. Sounds in the auditorium are recorded via an array of microphones, processed, and played back into over 70 speakers. This real-time audio processing gives rise to the perception of a new acoustic space. Since hearing aid users rely on their hearing aids in many environments, researchers must examine their usage in many contexts. This virtual acoustics technology provides researchers complete control over the sounds that reach participants’ ears.

“If you develop hearing loss, and most of us will as we age, you can be fitted with a hearing aid,” says Dr. Trainor. While hearing aids work well in quiet environments, they distort music. Their limited computational abilities cannot process sound in the same way as our advanced auditory anatomy. They also do not work well in noisy situations: “You may go to a restaurant and find you cannot understand the person next to you if there is loud background noise,” says Dr. Trainor. The ability to tune out background noise in a loud restaurant is not only controlled by your brain—it begins in your inner ear.

Leading the research on hearing aid technology in the LIVELab, is Associate Director, Dr. Ian Bruce, who also runs McMaster’s Auditory Engineering Laboratory. His work applies principles of computational neuroscience to mathematically explain how the human hearing system works. Dr. Bruce helped develop a computational model of the peripheral auditory system which is described as “highly influential and comprehensive” by peers in the field of auditory neuroscience (12).

“One piece of technology that we make a lot of use of in my research is KEMAR—an acoustic mannequin who […] has a microphone where the eardrum would be.”

“We are able to record what a subject would be receiving as sound waves at the eardrum.” Dr. Bruce and his graduate student, Larissa Taylor, record concerts with KEMAR and test a variety of hearing aids’ settings and systems to determine which perform best in live musical settings.

Hearing aid technology has progressed immensely since the release of the first models. The first hearing aids were essentially cones inserted into the ear, also known as ear trumpets (photo left) (13). Now hearing aids are digital, discrete, and come in a wide variety of shapes and types (photo right) (14).

The best medicine for noise-induced hearing loss is prevention (6). Noise exposure has many sources. Increased availability of headphones has been correlated with increased  hearing loss in youth (7–9). Public transit is also a threat to auditory health with maximum noise levels on Toronto subway platforms exceeding 105 dB (Table 1) (10). 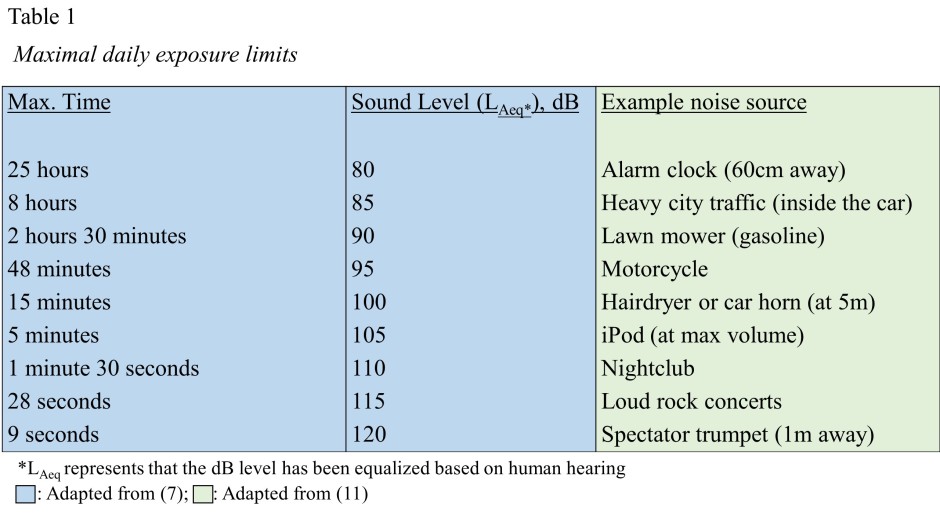 Hearing loss is not just caused by the bursts of loud noise that cause pain. It is a combination between the duration of exposure and sound level that makes prolonged music listening as damaging as a quick, loud car horn (3). A review published by the World Health Organization cites several prevention strategies including: (a) respecting safe volume levels, (b) taking listening breaks, and (c) wearing ear plugs in noisy environments such as concert and dance venues (7). Protecting one’s hearing is important. But not all noise is avoidable, and as exposure accumulates throughout the lifespan, so does hearing loss.

Noise exposure poses another threat—the development of tinnitus. Tinnitus is the sensation of temporary or chronic ringing, hissing, or roaring without any external source (7). Neuroplasticity, or the brain’s ability to change, is often celebrated because it helps us learn, adapt, and recover after injury (15). However, occasionally, as is the case with tinnitus, neuroplasticity can run awry (16,17). Research suggests that tinnitus occurs when the central auditory nervous system attempts to compensate for reduced signals, caused by damaged hair cells, auditory synapses, and/or auditory nerve fibres in the inner ear (18,19). Chronic tinnitus can lead to sleeping problems, anxiety, and depression (7).

Research conducted with Dr. Larry Roberts, professor and core researcher in McMaster’s Institute for Music and the Mind, demonstrated that among a sample of 170 Brazilian adolescents, 29% reported hearing tinnitus in a silent sound booth and 55% reported experiencing temporary tinnitus within the past year (19). There was no detectable hearing loss in the participants with tinnitus. But the adolescents with tinnitus experienced discomfort to loudness at a level, on average, 11.3 dB lower than the participants without tinnitus. People with tinnitus also have greater difficulty with speech perception in noisy environments, even without hearing loss (20).

While counselling can help with tinnitus’ impact on mental health, currently there is no cure. Dr. Dan Bosnyak, technical director of the LIVELab, and colleagues Dr. Roberts and Dave Thompson, attempted to re-train the brains of people with tinnitus. While they observed changes in some brain regions, neuroplasticity was reduced in the primary auditory cortex (21). Dr. Bosnyak remains hopeful that an effective treatment is on the horizon, however, his research interests have now turned to the rehabilitative potential of music.

“I am quite interested in that feeling you get when you are in a crowd of people watching a compelling musical performance. Synergy … builds up amongst people … I am trying to figure out if there is a way to manipulate that feeling.”

The same synergy that captivates audiences might be harnessed to enhance rehabilitation outcomes in group therapy. McMaster University is situated in the greater community of Hamilton which is also home to the Ontario Music Therapy Academy. “Hamilton has a surprisingly vibrant arts scene,” says Dr. Bosnyak. It is at the crossroads of music and neuroscience.

While the LIVELab was originally designed to examine the intersection of psychology, neuroscience, and the arts, it is perfectly situated—with location, technology, and expertise—to explore research related to the rehabilitation sciences, especially within the context of auditory sciences.

Begin typing your search above and press return to search. Press Esc to cancel.